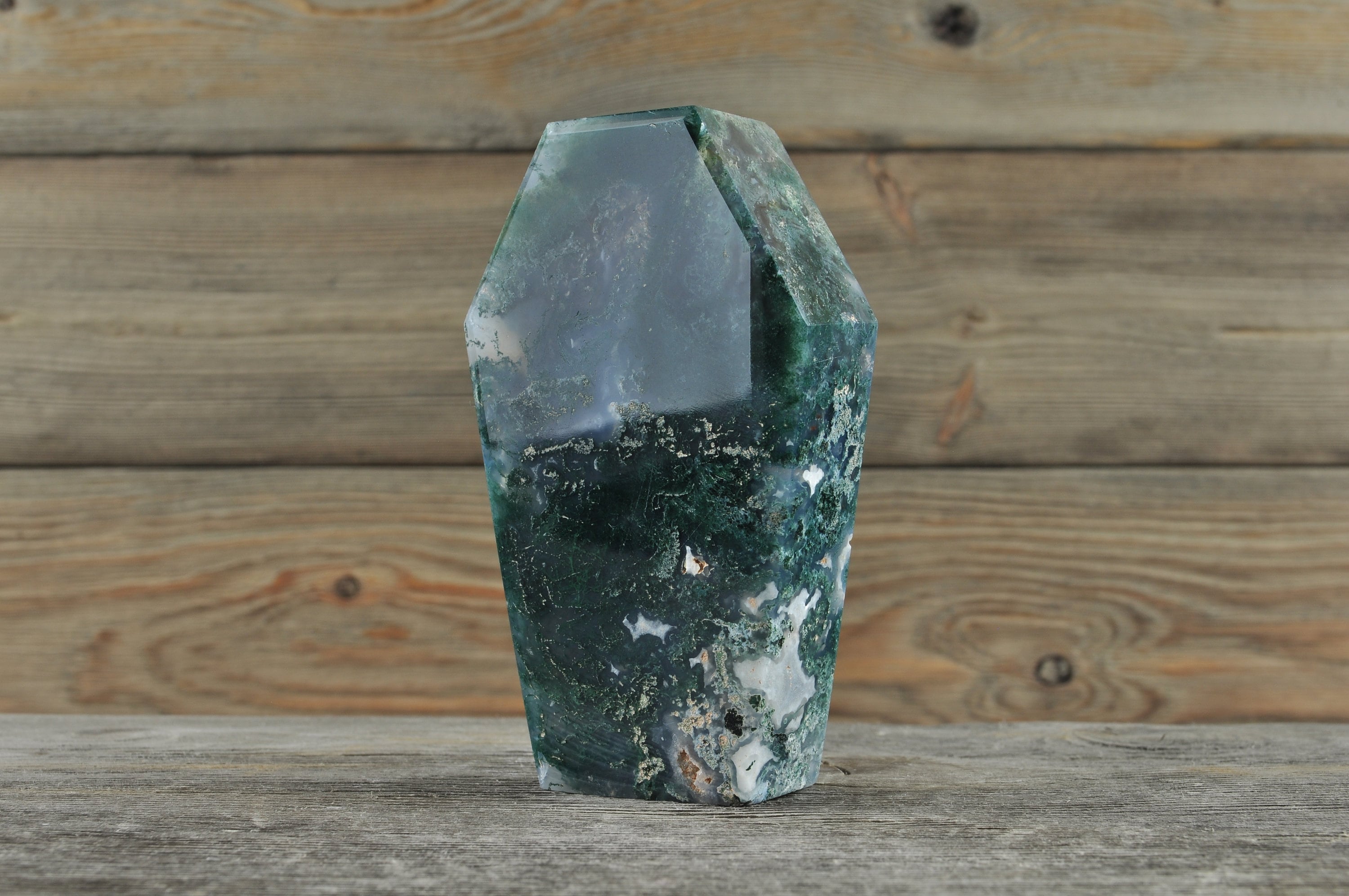 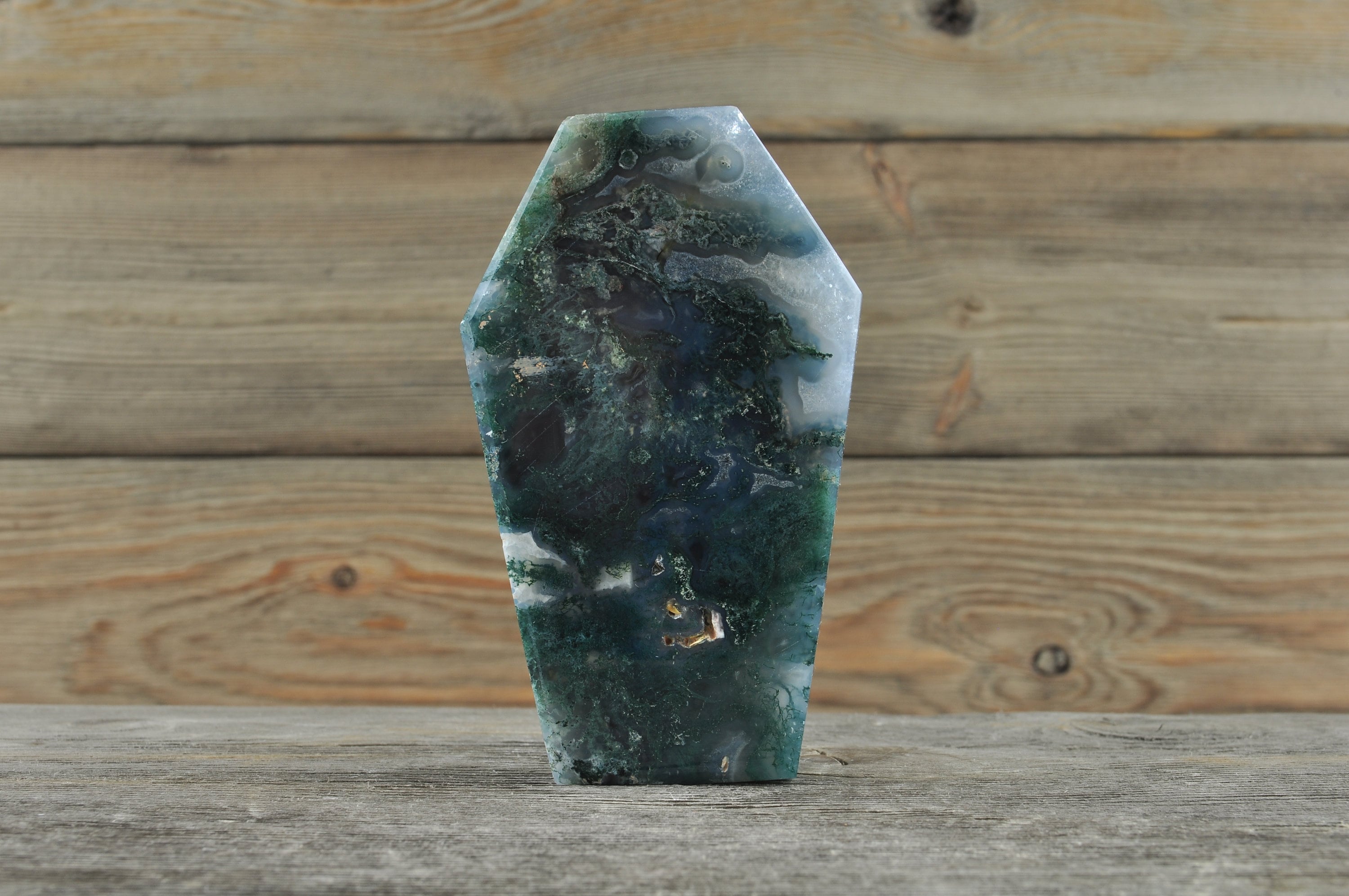 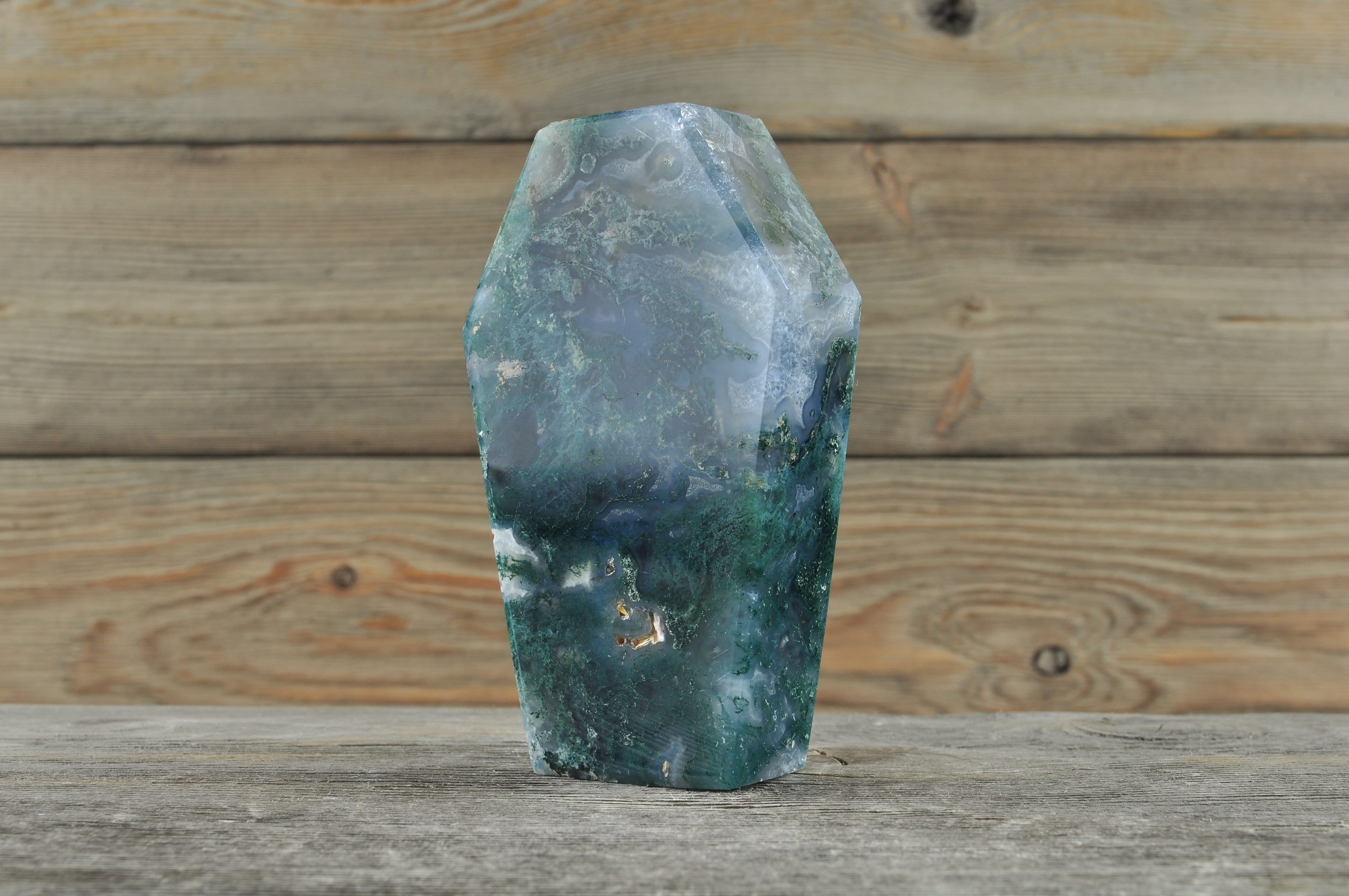 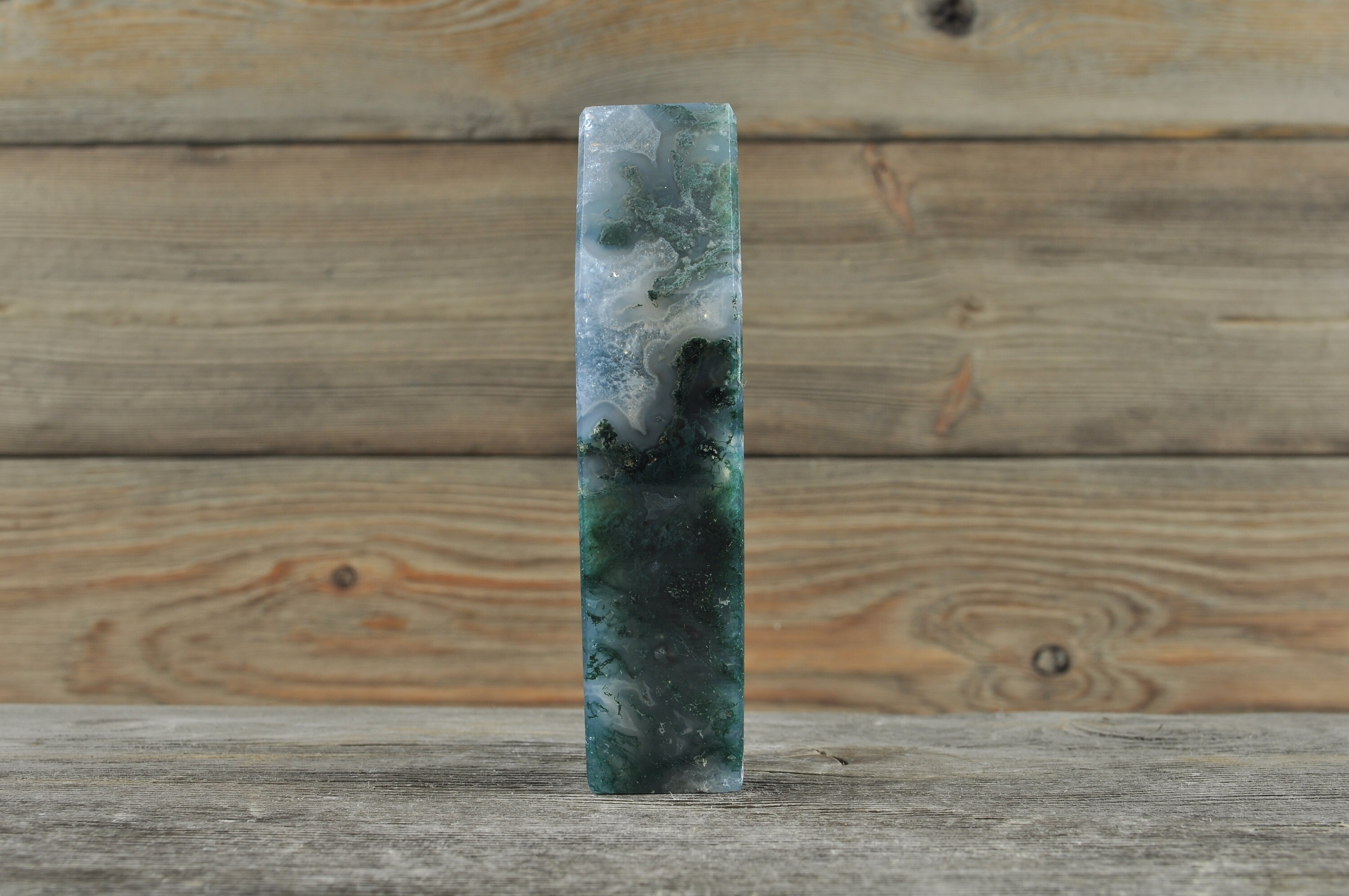 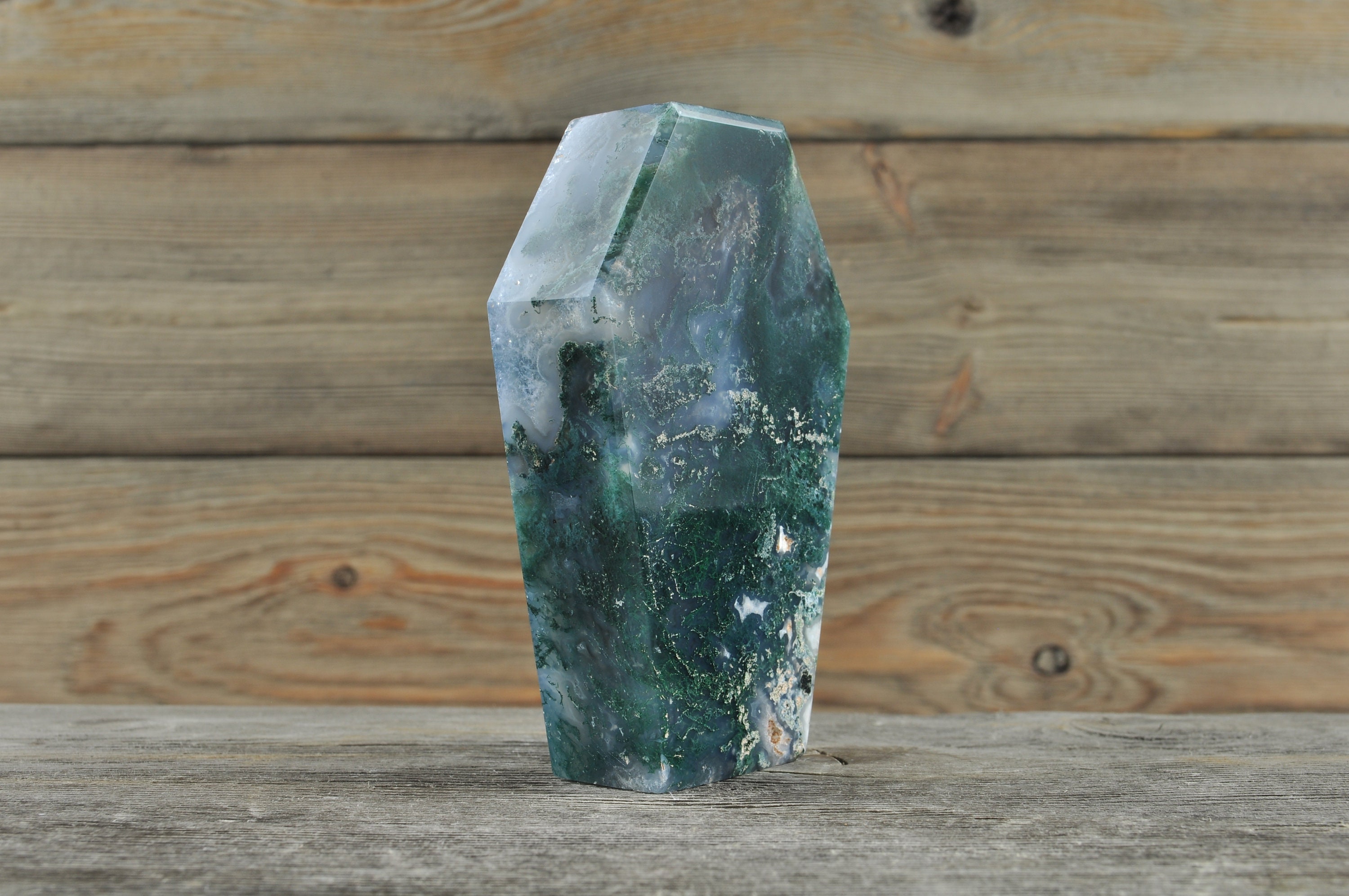 Awesome Green Moss Agate Coffin, Tomb! These tombs are made of real gem stones and are a fantastic addition to anyone's creepy collection!

The Coffin pictured is the exact one you will receive.

Moss Agate is considered a “birthing” crystal that can assist midwives in their work. It helps to release old habits and promote forgiveness. It also attracts wealth and abundance, improves self-esteem, and helps to calm and release fears. Moss Agate also comforts and soothes emotional wounds. Use Moss Agate to balance the Heart Chakra when releasing stress.

Physically, Moss Agate may help with depression, especially when caused by brain imbalances. It cleanses and detoxes the circulation and elimination systems of the body.

In general, Agates carry a quiet energy that works on the subtle bodies, and are great for achieving stability and balance in many aspects of one’s life. Agates tend to work behind the scenes on the cause, instead of the symptom, of an issue. Agate is believed to improve mental functions and can help where issues of clarity and stability are concerned. Agate is also helpful in overcoming negative emotions by bringing love into the chakras. Although they work very slowly and deliberately, this gentle nature of Agate helps them to have a lasting impact.

Are you a business owner? We offer wholesale prices as well to approved customers!!

💜 Keep up to date with sales, crystal information and more on FACEBOOK : www.facebook.com/innercirclejewelry

💜 Keep up to date with sales, crystal information and more on INSTAGRAM : www.instagram.com/innercirclejewelry

Full payment is required prior to shipment of product.

Item(s) will be mailed (unless otherwise specified) within 3-5 days of receipt of payment.

Shipments are sent via Canada Post and can take 5-15 business days to reach your destination. Customs processing may extend this period.

But please contact me if you have any problems with your order.

We do not issue refunds or exchanges.

Tracking and Insurance:
Packages are NOT tracked or insured. Your order is made at your own risk. Although very rare, items may become lost in transit, in these circumstances Inner Circle will not be held responsible, however we will work with you and the shipping company to try and locate the parcel as best we can. Larger items generally come with a tracking number, however this is not guaranteed, if you would like confirmation before ordering please contact us beforehand. In some cases orders will come with a tracking number even if one is not requested, this occurs when shipping to your destination costs the same with or without a tracking number. In these cases, you will be notified of the tracking number at the time of dispatch.

Damaged Items:
In the unlikely event that your item is damaged in transit, please contact us so we may make arrangements for a refund or partial refund. We may ask you to return the item depending on the damage sustained.

Customs:
You may be charged import fees, duties or taxes on your parcel, these fees are the responsibility of the customer and are not covered by the shipping charges.

Something we didn't cover?
If you have any other questions or concerns regarding shipping or anything else, please do not hesitate to contact us!


0 items in your cart